Walmart is set to report its third-quarter results tomorrow.

For those that pay close attention to the results, here’s what Stratably is thinking about before the call.

The retail market has softened in the last three months. Inflation has continued, some companies continue to deal with supply chain and inventory issues. Amazon projected a modest fourth-quarter. Social platforms have issued downbeat outlooks partly because of the economy.

Even if Walmart’s 3Q results meet expectations, all eyes will be on its outlook for the holiday quarter.

There are five areas to watch as a read-thru to how the retail and digital commerce markets are performing:

Exiting 2Q, Walmart had $1.5B of excess general merchandise inventory. Management felt confident it could work down this amount in 3Q setting up for a clean holiday period. The primary headwind facing Walmart has been the worsening demand environment that characterized 3Q.

Management should provide an update on where Walmart sits today with this inventory. It will be a very bad signal to the retail economy if Walmart expresses any issues related to clearing up this inventory.

The most surprising element of the last month was Amazon's downbeat forecast for 4Q (shown in the chart below). It's likely this outlook is industry-specific rather than Amazon-specific. Walmart's outlook, in combination with Amazon's, will help clarify if that's true and arguably be the clearest signal retail leaders have in terms of what to expect this holiday.

The digital comp is slightly tougher for 3Q, but Walmart should be able to deliver double-digit growth.

The move to a 2nd-price format has helped improve ROAS, with this hopefully resulting in an acceleration of Connect growth in the quarter despite a tough macro backdrop.

Walmart reported Luminate grew 75% Y/Y last quarter. There's no comparable base nor time series to judge if this is very good or just mediocre. Our research has suggested adoption has been slow to start.

Walmart did release a free tier of Luminate during the quarter, helping expose more brands to the tool. While this won’t drive revenue or profits, it will help adoption figures and possibly serve as a funnel to getting some free users to convert to paying.

Walmart+: The company continues to try to grow its membership offering. It recently discounted membership for two days in addition to adding benefits like Paramount+ and curbside or at-home returns.

GoLocal: Walmart reached 1mm deliveries with its GoLocal offering in the first year. This service competes with omni-enablers like Instacart and Uber Eats, and increasingly, Amazon.

Marketplace growth: Walmart has increasingly ramped up the portion of marketplace sales flowing through WFS (it's FBA-like service). The biggest areas of opportunity for Walmart include streamlining the set-up process, offering more competitive rates than FBA, and helping grow consumer awareness Walmart.com is a useful site for long-tail products. 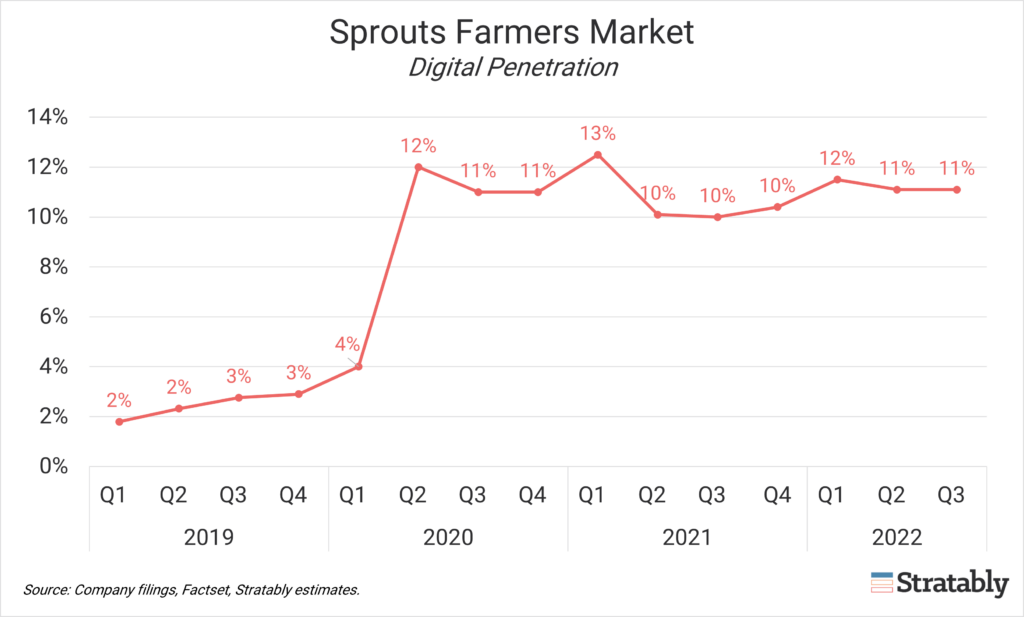 The company highlighted its new partnership with DoorDash (expanding chain-wide by end of year) as a way to grow its customer base. It sees omni-enablers as key to its ongoing eCommerce growth.

In response to whether digital penetration will decline, Jack Sinclair, CEO Sprouts stated, "Our customers have clearly voted with their feet around e-commerce and as I said, you’re right, I expected it to maybe settle down a little bit more, but it continues to grow." 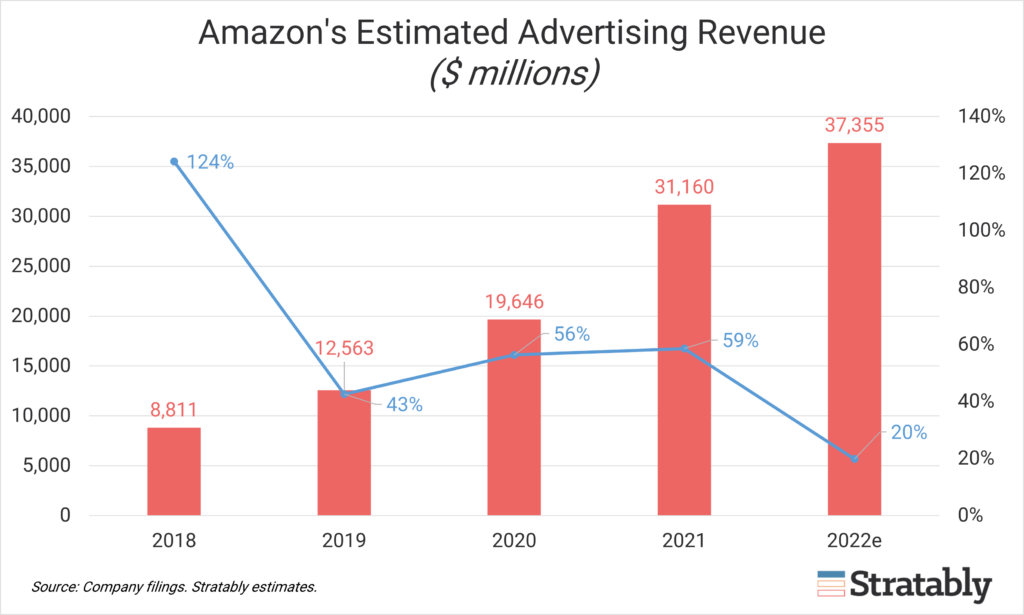 TikTok reducing its ad revenue target by $2B: "TikTok CEO Shou Zi Chew told a handful of employees during a recent meeting that the Chinese-owned app has slashed its ad forecast for 2022 to $10 billion from at least $12 billion previously, according to a person briefed on the matter." (AdAge)

This makes Amazon's ad resilience all the more interesting.

With consensus forecasts for 4Q22 calling for ad revenue of $11.4B, that puts the full year estimate north of $37B. This is exactly inline with Stratably's forecasts at the beginning of the year, indicating marketers have maintained spend despite the slow down in retail sales and eCommerce and a more uncertain macro-economic backdrop. 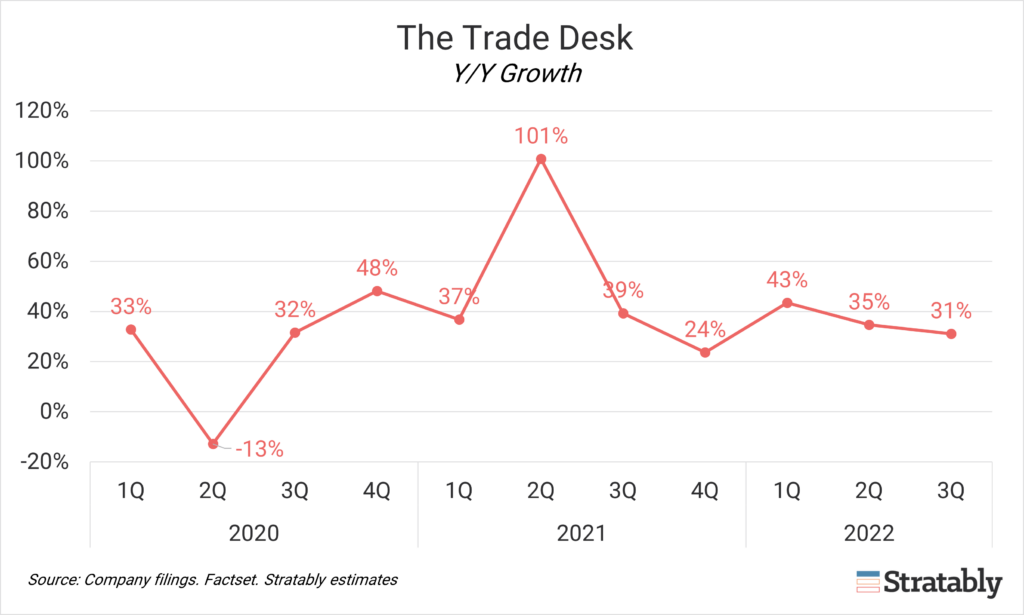 Programmatic and CTV spend resilient: TTD is a read on digital ad spend, programmatic, connected TV and to a degree, retail media via its partnerships with Walmart, Albertson's, Drizly, Meijer, Kroger, Target, Walgreen's and more.

Its sales grew 31% Y/Y during the third-quarter, a modest deceleration from trajectory seen last quarter. CTV and shopper marketing were called out as the two primary areas of growth.

The company's outlook for 4Q fell below investor expectations wit the main culprit the macro-economic backdrop.

Jeffrey Greene, CEO, stated "If there was an advertising VIX (index that measures stock market volatility), it would be at an all-time high. And it's hard to say whether that's because of macro headwinds or mostly macro uncertainty, but it would be high because of one of those themes in each case."

Jassy initiates a cost review exercise: Amazon is reportedly undergoing cost-cutting exercises across the company, following last week’s announcement that it would be freezing new hiring.

This is to be expected considering every company is looking to “batten down the hatches” (as Bezos recently tweeted). This is certainly important for Amazon which is forecast to grow sales 11% in ’24 compared to ~30% pre-pandemic.

The last time Amazon had a similar profitability focus was in 2017. The result of this focus was a doubling in operating margins in ’18 and ’19.

These moves are unlikely to impact the pace of innovation in the highly profitable advertising and analytics efforts underway at the company. However, 1P consumer brands can expect continued challenges finding someone on the other end to help with operational issues and tough-as-ever AVNs. Perhaps most interesting is how Amazon evaluates its physical stores business. (WSJ)