Amazon’s Business is Evolving (The Grubhub Deal Illustrates How)

Amazon’s deal with Grubhub is so much more than simply adding another Prime benefit.

If you look closely enough, it’s a way to understand the future as Amazon sees it. Buy with Prime, Amazon Pay, AMC, Advertising, Quick Commerce, and more all relate to this deal.

Read on for an incomplete, albeit sufficient (!) history on the JET/Grubhub acquisition (gone bad), Amazon’s similar deal with Deliveroo, why it’s a win-win for both companies, and nine ways Amazon can create value with Grubhub. 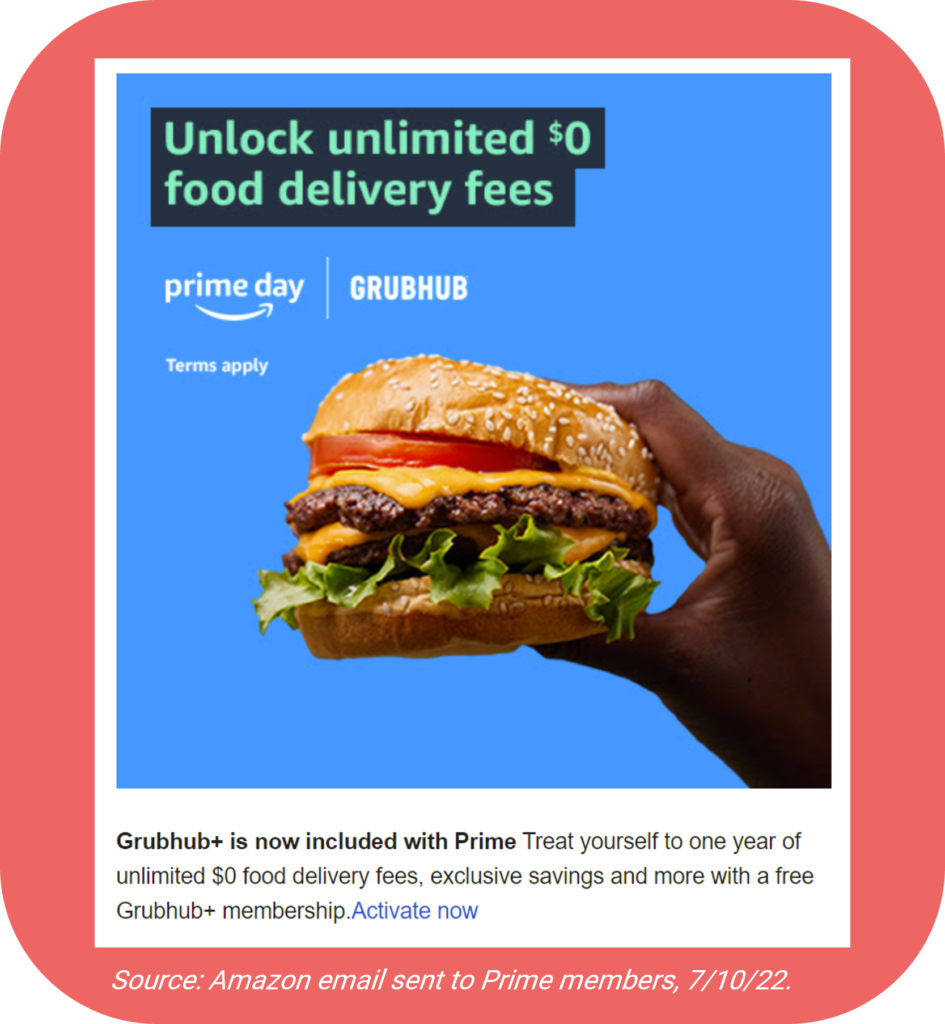 The press release at the time touted the cultural fit between the two organizations. Matt Maloney, founder of Grubhub would run the combined operations in the N. American market.

Everyone was excited: “I’ve known Jitse (founder of JET) since 2007 and his story is much like mine. Combining the companies that started it all will mean that two trailblazing start-ups have become a clear global leader. We share a focus on a hybrid model that places extra value on volume at independent restaurants, driving profitable growth. Supported by Just Eat Takeaway.com, we intend to accelerate our mission to be the fastest, best and most rewarding way to order food from your favorite local restaurants in North America and around the world. We could not be more excited.”

This was peak COVID when there was much optimism the run-up in digital commerce would remain in a post-pandemic period. It was also an intensifying competitive environment as DoorDash, UberEats, and Postmates had taken substantial share from Grubhub.

There was inner turmoil at JET as well. Matt Maloney left his position with the company in December 2021 “to pursue other opportunities”. JET was left with a founder-less asset that was losing share to powerful rivals. 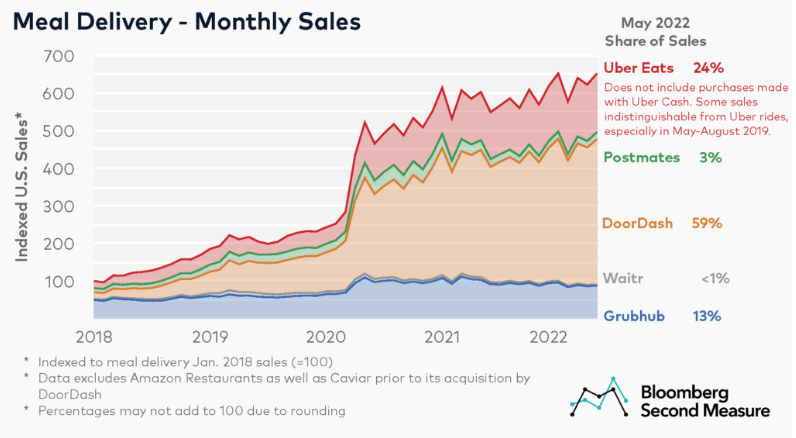 Pandemic growth spikes gave way to decelerating growth in the U.S. market as seen with sales forecasts for DoorDash and Uber Eats. 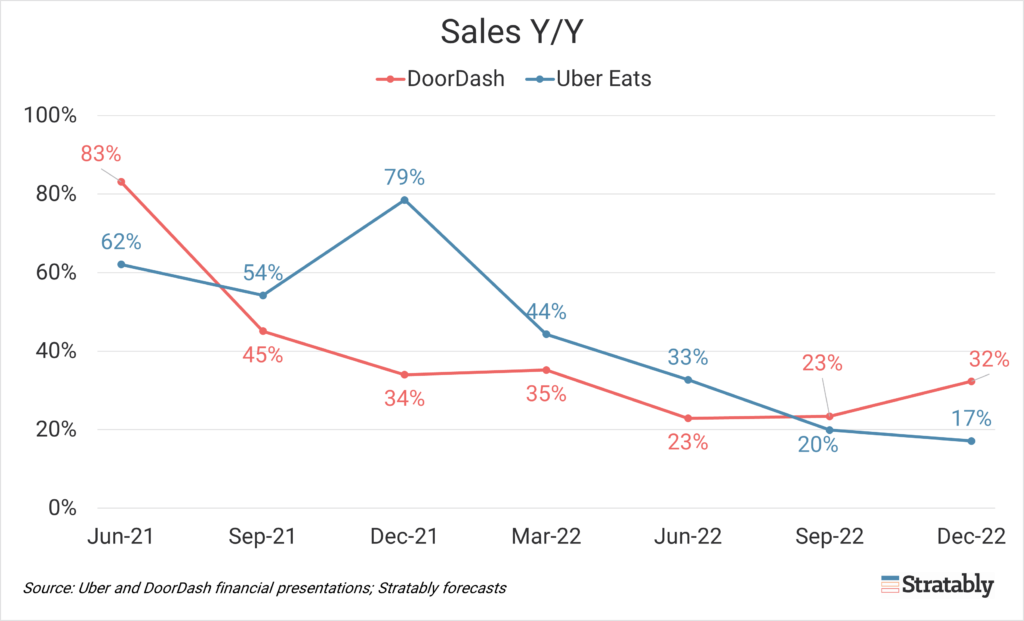 Both DoorDash and Uber Eats also began expanding their capabilities, looking to offer online grocery delivery (see both in the diagram below) and launching fledgling retail media offerings. 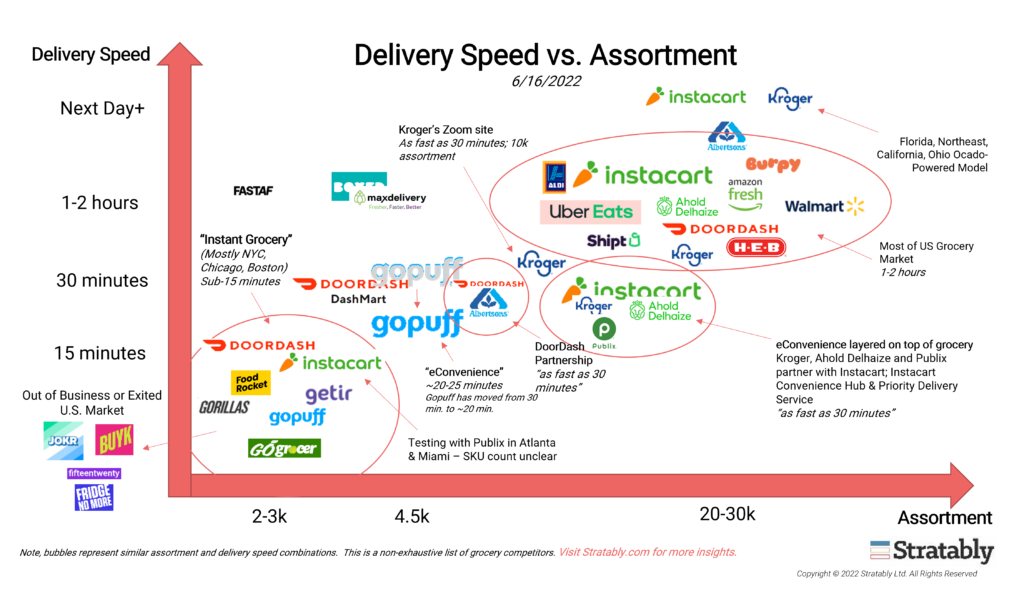 JET puts Grubhub Up for Sale

In response to the pandemic come down, Maloney exiting, powerful rivals in the U.S., and Grubhub’s profitability struggles, JET announced it was putting Grubhub up for sale, less than two years after acquiring it.

Much like its parent company and rivals, Grubhub is reportedly worth substantially less than the $7.3B acquisition price.

There have been rumors Matt Maloney considered buying it back for $1B and that JET has not received much interest from other buyers even at that steep discount.

Amazon has always had its eye on the restaurant delivery market, but failed in its direct efforts. It shuttered its Amazon Restaurants initiative in 2019 and has since looked to partnerships to get exposure to the market.

Deliveroo serves as a useful analogy for the Grubhub deal. Deliveroo announced Amazon would be investing 575mm pounds in May 2019.

Details on the Grubhub/Amazon Deal

Amazon will provide its Prime Members (~155 million in the U.S.) with free Grubhub+ membership (normally $9.99/month). Grubhub+ enables free delivery on $12+ orders at eligible restaurants (delivery fees vary without membership, but average $5) along with a few other benefits.

Amazon is covering an undisclosed portion of the cost of this offering as JET estimates the deal will be neutral to its earnings and cash flow. In exchange, Amazon receives warrants to acquire 2% of Grubhub at a de minimis price, and then depending on performance, warrants for another 13% at a formulaic price.

While there is no publically available valuation for Grubhub within JET, reports suggest the company would be traded for around $1 billion.  This implies Amazon’s 2% share amounts to $20 million.

Thus, Amazon gets $20 million in Grubhub ownership, can add a benefit to its Prime member list, and then has a financial obligation to cover costs associated with however many Prime members sign up.

There ends up being a lot of assumptions on assumptions needed to model the potential economics of how this might play out. But that’s never stopped me before!

In addition, both sides will have more information on the value of the asset if future negotiations are held for Amazon to acquire total control.

Let’s assume for a minute the deal goes incredibly well, Amazon exercises warrants to reach 15% ownership, and then decides to buy the asset for total control. It would have nine meaningful ways to drive growth, both directly and indirectly.

Except for the top reason, we’re A LONG WAY from Amazon and Grubhub delivering on all aspects of these. In fact, you can only really see the first reason – adding another Prime benefit – right now. It’s mostly a small experiment for both sides with each taking on little risk.

But opening the aperture a bit illustrates how Amazon will grow in the future. It wants a piece of wherever commerce is happening. Its analytics layer means it can be disruptive to whatever industry it chooses. Prime brings conversion benefits, logistics is a density game, it wants to lead in delivery speed.